This is the second post from the trip to Texas, I wrote it Thursday June 19.
I couldn’t get the Microsoft Word to post in the 30 seconds I tried but, I will give it another shot and hopefully I will get internet for longer next time.(It didn't work for me so, I am doing it with blogger). The truth is I could have had it today for several hours but didn’t know it. Here’s the scoop, we were driving down the highway enjoying the air conditioning, I'm laying on the bed talking to my friend Lisa on the phone and next thing I know Dave/the driver is coasting along on the drunk bumps. That’s fairly annoying when I’m trying to talk, so I sweetly shouted…WHAT’S GOING ON !

The motor quit, stopped right in the middle of nowhere… now wouldn’t you think one of us would be freaking out?? Nope we are cool as a couple of cucumbers, since we still have the generator and it is letting the a/c do it’s magic. A long, long story made short, we called a tow truck, 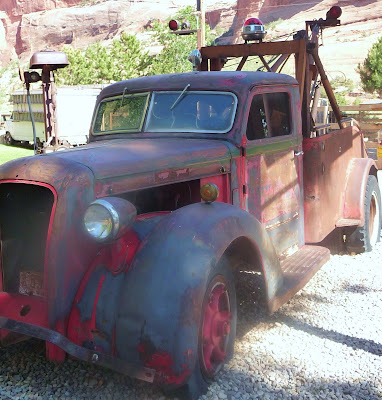 much to Sam’s delight. After a couple magic turns of a wrench and $700 later...yipee skipee we are on the road again. It was the fuel pump, guess I shouldn’t have messed with it trying to get better gas mileage.. ( you know I’m kidding) Dave/ the driver and master mechanic (not this time) says we will get better fuel mileage. I certainly hope so, because under no circumstances can we turn off the a/c. Anymore trouble with Dumbo the R/V, and we are selling him to the circus and getting a sweet one like this 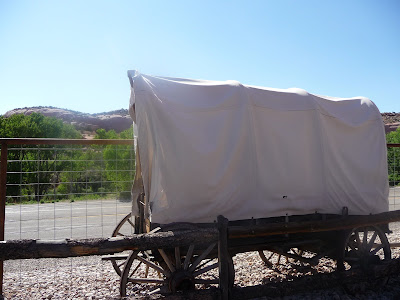 Unfortunately our entire day was taken with that escapade, so I did not get to do one little bit of buying today. Oh, except for that adorable fuel pump! That is my mission as you remember, to hit every thrift store between here and Texas. The tow truck driver wouldn’t stop when I asked!! What a mean spirited guy he turned out to be, glad he’s not going the rest of the way with us!
Tomorrow I will hit it hard, hopefully Dave/the Driver won’t do his man thing and want to make up for lost time... After all I have a job to do, and I want to do it good. My friend Mae (she was about 75 at the time) told me, "I told Nick when I married him, it’s his job to make the money and it’s my job to spend it. And if you don’t do your job, I can’t do mine!" I think that is pretty good advice.

Yesterday we stopped in Baker City and I found a great pair of cowboy boots and an adorable apron. I also shopped in this wonderful stationary store. I have a thing for paper and pens, I stocked up for fear we would, say have engine trouble and get stuck on the side of the road for several hours?? Quick thinking on my part.
I went to a Salvation Army that was bad! Worse than any Goodwill Outlet I have been in. It was like something my mom took me to when I was little, including the odor! Great memories from my youth. Of course that didn’t stop me from looking in every nook and cranny. I did buy an oil painting, I hung it in Dumbo’s outhouse/bathroom. I have been doing a little decorating along the way.
I decided to cover the vinyl roll-up shades with fabric. Fortunately I had spray adhesive along and masking tape and the sewing machine… I will show you the photo’s when I get done. I'm not sure if it is going to work, but I will give it my best shot.

We are still going down the highway and I am here to tell you we have not found gas for 17 cents per gallon. 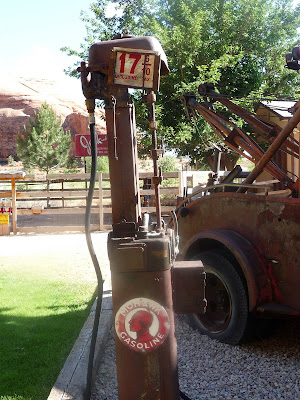