Expo was great fun, it was hot, hot , hot on the asphalt. I loved it and certainly prefer the heat to the cold so... I love being outside, for one thing the spaces are bigger, and it is okay to fudge a bit on the boundaries. There is air conditioning inside, but really... I had Dave take Dumbo (the rv) to the show, pulling the trailer, yes much like a circus train. He actually took it to work and then on to Expo. I wonder what the people at work thought?? They were most likely looking for the rest of the circus animals... I wanted to stay in town since it is at very best an hour one way, and the last thing you feel like doing after all day working in the "trenches" is driving home and then back again the next morning. The parking lot is at Portland Meadows, that is the horse racing track, which is a mile or so from the show. They have a shuttle and there are lots of other "campers". I invited friends to stay, but only Diane who lives about a half hour further than I do, took me up on it. Dumbo has all the amenities of home you realize... There was one little kink with the water on the second day(it stopped working). I didn't want to tell Dave, because I didn't want him to come all the way out to fix it; so I washed my hair in the sink at the restaurant. Yes I know it sounds a little strange, but seriously I have done stranger. And as hot as it was, it took no time to dry. The unfortunate part was I forgot shampoo and a towel so I used the pink hand soap and paper towels... which by the way are really not that absorbent! Here are a few shots of the event. Seems like that is what I am always showing is pictures of the "show," this could get old and boring, so I will put a few out there and move on.
This first picture was taken Sunday when we where all pretty hot and tired. We were not the best salespeople, 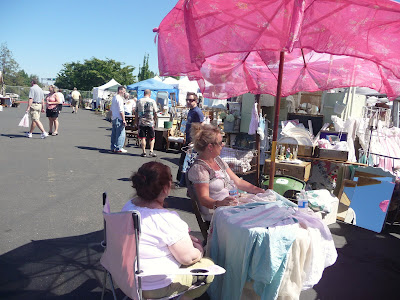 we were sitting at the chairs out in the aisle and telling people if they wanted something to bring it to us and we would take their money.... not really but almost. 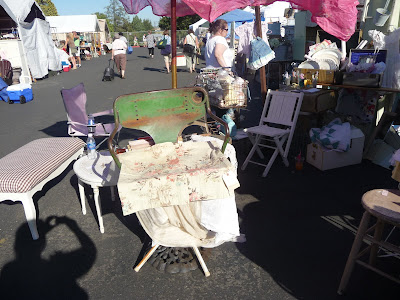 I love the John Deere tractor seat, I apparently am the only one since I still have it.. I thought it would make the best tree swing, I guess I will have to put the seat on it and chains. Of course if I go to that much effort I might have to use it in my own tree.
This is a shot of the booth as we were putting it together, 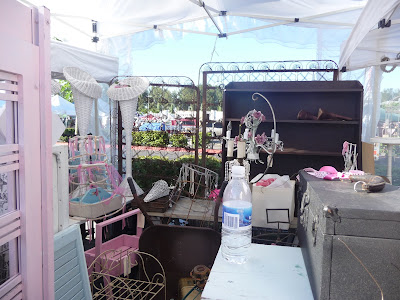 Yes that is a water bottle, some one must have left it in there, you know I
was drinking Diet Coke!
Next is a picture of the booth kinda put together... It was very narrow in there. The booth's were only 9 feet wide instead of 10 soo.. I had a very narrow walkway. I figured once people were in and couldn't get out they would be more likely to find something they couldn't resist... 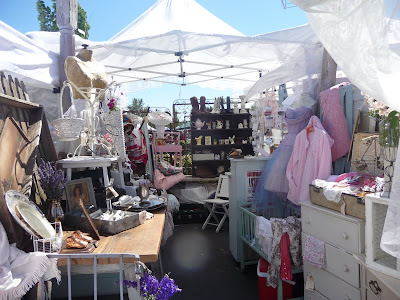 Here are Lisa and Shannon, 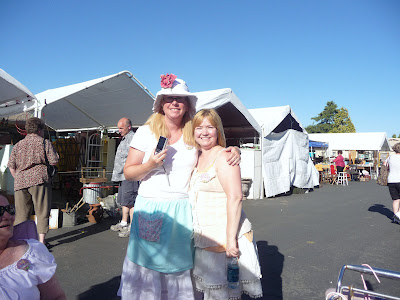 Shannon and her mom Maryann were my neighbors. Lisa is with Isabel in a booth a few rows over.

I wanted to show the apron I made. Of course Dusty screen printed them for me and I sewed it. I have more to make for the next show. I love the bingo cards. 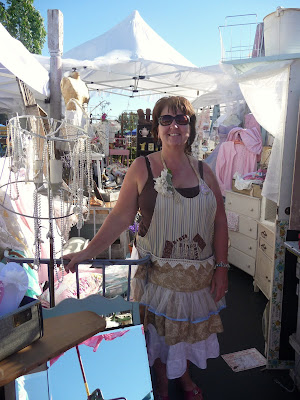 One of the best parts of the show is seeing old friends and making new ones. It is nice to have great neighbors so you can watch each other spot while you go shopping or happen to be late.

Here is the gang, (all except Cindy) who had to work her "real" job and couldn't join us. On the far left is me, (my hair doesn't look that wet do you think?) then Maryann, Shannon, Isabel, Diane and in front is Lisa. 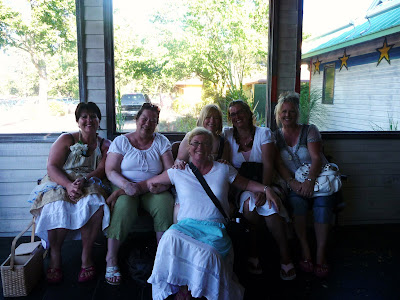 It was a lot of fun and now I am looking forward to the next event, that will be July 26th at Barn House I hope you will come, those guys know how to have a great time!! Please take a minute and look at their blog it is so beautiful and they are so funny! The sale I went to in May was awesome. I am wondering how all the gardens are looking and how much the chickens have grown.

And now for, TODAY'S NEWS. Sounds like a television reporter..
Did I hear someone say "time to move" or we could also say "flip this house". I have a feeling it would be less work and time consuming to find a different house and replant ourselves. But since the other half of this married couple can't even consider that, (probably since he works away from the house and it doesn't make him crazy all day) I need to take charge, and make some interior moves. All this to say, once again lets play Musical Rooms! I thought we should move the dining room to the family room, the family room could be integrated with the living room and the dining room, could be an entry with some furniture?? A table and maybe some chairs? I hope people don't think the entry is the dining room... That would be seriously wrong! How crazy would that be? Who ever heard of two dining rooms?? The goal here is to keep the food out of the family room which is no more... I think we could eat at the table in the entry and see the television, which I know is a bad, bad idea, but we do it anyway so I might as well make it convenient I have been getting the "itch" for sometime, but after hours of therapy, (Expo) that seems the best course.. Stay tuned and I will PPAIG, (post pictures as I go.)