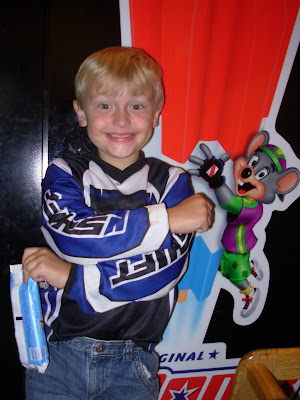 Yes folks, I did indeed go to Chuckie Cheese. I hate that place!! It is crazy! I must admit though it has improved over the years. My first experiences with Chuckie were with three wild boys at the Chuckie Cheese on 82nd in Portland. This was almost 25 years ago....It was worse than a zoo, it was very loud, dark, and crowded. There was no rope at the door and stamp on your hand to make sure no one took the wrong child home... Today's stores are much improved.

I have found that doing things that I did with the "original" children are generally more pleasant than I recall when I do them with Sam. Probably for a variety of reasons, one child instead of three, most activities have improved over time, but also I'm not that worried about what other people are thinking in regards to my parenting skills. The skills have probably not improved over time but he seems to be coming along fine despite the attitude from his mom.

When he was a baby I would tell people that all of Sam's friends were over forty and female... It was true then but now he has a few friends of his own and I have made a few younger friends as well, also despite my attitude.

The deal was our friend Gabi and I are teaching Sam "sight words" and when he learns the first 100, Chuckie Cheese was to be the treat. The original deal is still on, but we were in Vancouver Washington and I couldn't find a kid friendly restaurant without golden arches so that is where we landed last evening. Sam is starting Kindergarten next week and they are testing so we want to be ready and reading on the first day of school!!

Do you have any idea how MANY sight words there are? Probably should have allowed a little more time for this project!
Posted by Auntie Joy at 8:31 AM