Of course we were two hours behind schedule when we left and it we just kept getting further behind as we went, you know the quick stop at Costco for gas, just a few groceries and a couple cases of Diet Coke for the road... Then of course the fact that the hitch didn't work right on the RV for the trailer and the tires needed a wee little more air to compensate for the heavy load, so off to Les Schwab...(the tire store)
I had intended to get a picture of Dumbo the RV pulling the trailer (the circus train) but it wasn't long into the trip that I realized I had forgotten my camera, it was in the cute little bag that I bought to carry my electronics. The cute little bag that held my laptop, cellphone charger, camera etc.... It certainly pays to be organized!!
Be assured that I did bring everything else in the world! The trailer was PACKED so all those little things I didn't want to forget (except the cute little bag) were in the RV, everywhere... Why would they put those tiny little bath tubs in if they hadn't known you would need extra storage!!
We had called ahead for reservations at the fairgrounds where we would be staying. When we finally arrived, about 1am we could NOT find the campground!! We decided to just get in line for the delivery and go to sleep! When we saw where we had parked we had to laugh! We were between two train engines headed straight for us! Lucky for us they were a permanent display at the fairgrounds!!
Of course I would need a quick shower, so after moving things from the temporary storage unit. I hopped right in, all the privacy in the world with one little curtain that kept opening... Then its time to unload and we wouldn't want to loose our place so... now I'm showering as we are driving!! Thank goodness for the curtain!! Whose next in line for a shower??
We spent all day Friday unloading the trailer and setting up our booths. It was a lot of work, but so fun to meet the other vendors and have a peek at what they had brought. Wish I had my camera along... I heard someone say, that someone said... (could this be gossip) we really worked our asphalt off!! So very true!!
I copied this picture from Cindy's blog so you could get an idea of how many people waited in the pouring rain to get into this wonderful event!! 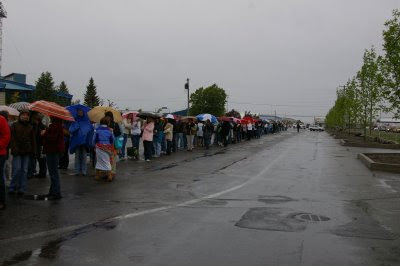 I was so fortunate that my sister Terri who lives an hour north of Seattle was able to come and help for the weekend. 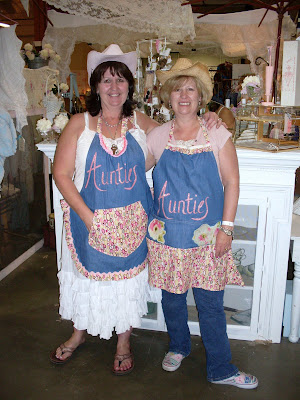 Many people wanted to know who was the oldest, it was so fun to say "her", she just hates that!!
I also loved telling people that Dusty silk screened our aprons and bags, I made the aprons after he put the Aunties on it, I should teach him to sew... He also silk screened t-shirts and camisoles for me to sell, unfortunately I sold one first thing and then spilled Diet Coke on the rest, that was a pretty amazing trick!!
Terri and I had fun being together and if it weren't for the help of my "younger" sister, I'd probably still be there trying to figure out where I put the thing I was looking for...she has figured out, the place for everything and everything in its place concept, wonder why mom didn't teach me that trick??
I loved being next to Cindy, her booth was wonderful with all kinds of treasures that people were delighted with. Be sure to stop by her blog so you can be inspired by her magic. 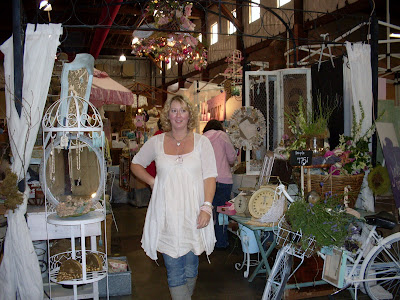 Here is a picture that Lisa took of my booth. 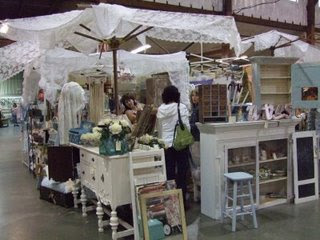 This is a shot of The Tickled Pink girls in front of their booth, you can see Isabel's blog if you click on that link. 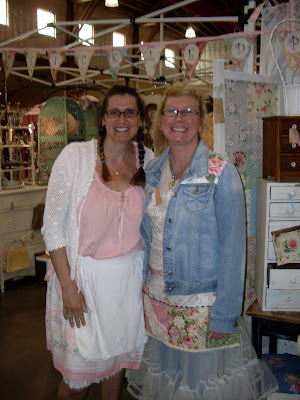 Isabel found the apron she is wearing at the show it was from Portugal and so is she, so that was pretty neat!! Isabel sewed the apron Lisa is wearing, she got the idea from Country Home Magazine, you take a carpenter's apron purchased from Home Depot and sew fabric and trim to it. She is an excellent seamstress and has beautiful fabric so hers are adorable.

I will share more on Farm Chicks later, this is about 3 days later than I had intended and long enough already.
I wanted to tell everyone that Baby Jack is doing wonderful, he is out of the hospital and home with his family! How amazing is that!
Posted by Auntie Joy at 8:45 AM