Going to the Dogs

It's no secret that I'm not really a dog person, now don't get me wrong I'm not a dog hater, just a little on the neutral side of, I love all dogs unlike most everyone I know...who adore all dogs.
As life would have it I have 4 boys, all who have wanted a dog at one time or another, actually all the time... So when my oldest son was in 5th grade and we moved to the country he got his dog. This was by far the most perfect dog possible for our family. I would list all the great things about her, but you would think I was exaggerating. We all loved Pepsi and she saw us through some pretty tough times.
This picture was taken about 16 years ago, the boys were just little guys. It was the first year we had Pepsi and the last year we had their dad. 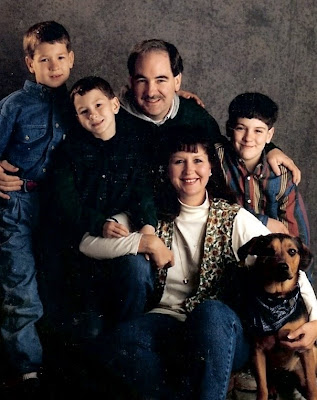 This was the last picture I could find of Pepsi, it was taken about 7 years ago when Dusty was leaving for boot camp and was sure Pepsi would be gone before he would see her again. 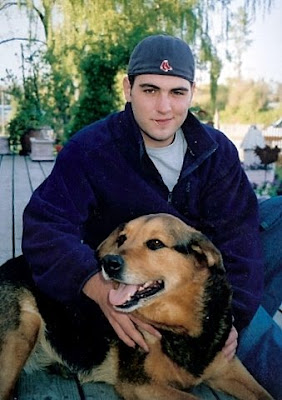 They both had grown up in those 9 years, and it turned out Dusty got to be with Pepsi a few more times, before she went to sleep under a tree in the front yard for the last time. She died in the least offensive way she could, because that's the kind of dog she was.

And now guess who wants a dog?
Here he is at almost a year old, with a friend's dog. 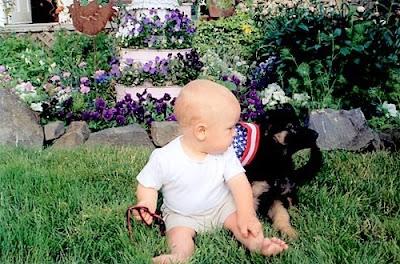 That's about as close as he's been to a dog since. Because the truth is Sam doesn't really love dogs either... He wants to, but fear is holding him back. Okay, blame me everyone else does apparently he picked up on my feelings...
To make a long story short my aunt has 2 dogs and is willing to share so... 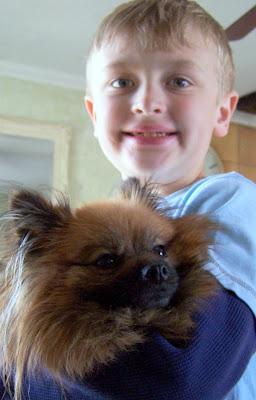 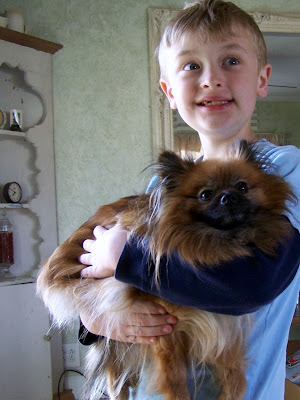 Neither the dog or the boy seem thrilled.
Lucky for us Grandma and Grandpa are living here, because Sage loves them... She barks when she hears Sam coming in the room and he runs the other direction, or he will walk way around, saying he doesn't want to step on her...such a thoughtful little boy.
Dogs are suppose to be great for the elderly. My dad said he should get a good nights sleep, apparently Sage moves around on his lap, keeping him from sleeping all day.
Posted by Auntie Joy at 9:07 PM